Rising from the Ashes

Beginning late at night, the 'massive blaze' was battled by firefighters into the early morning. When the Humes team was allowed back onsite, they found that nothing had survived the fire.

"There wasn't one piece of paper that escaped that fire," says Phil Gasston - Penrose sales centre manager, "not a single thing – it's amazing, not even a business card."

With a little help from our friends…

Despite the losses, Phil found it easy to stay optimistic with the support of his colleagues, and has also received an outpouring of support from clients.

"At 1am on Friday morning, as I was standing in front of the burning rubble, I was getting calls from customers letting us know that they weren’t going anywhere. You think customers don’t care, but they really do – it feels like a family business.”

With this support, the Penrose Branch team was able to get their operation back up and running. Within 24-hours of the fire, the team was on the phone to suppliers organising replacement stock and facilities to use. Humes provided two large containers which now act as ‘shops’ for some stock and, within two weeks of the fire, the Penrose branch reopened its doors.

"Strangely enough, this experience has been great for the staff, they've all just bounced back," says Phil. "It's been a great morale building exercise."

Phil says the biggest impact for them is driving to work and knowing things are totally different to what they're used to.

"But, everyone takes it in their stride - we've got a great team of people here." 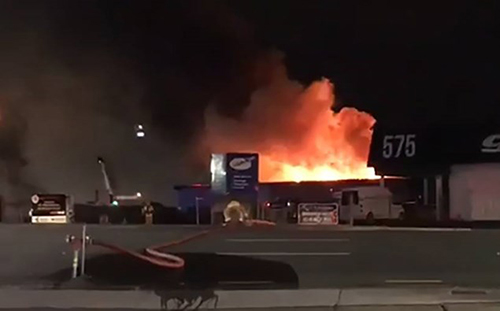